I have lived in Minnesota my entire life and never been snow skiing. I’ve been water skiing nearly every summer, but in the snow? Nope, never. Well, this year my boyfriend, Scott, decided to fix that. We planned a trip to Northern Minnesota to venture off onto the slopes. I was excited, but a little anxious about the skiing. See, in my mind, I pictured myself cutting in and out, back and forth – pretty much an all-star skier; but when I started talking to people, I realized I might be face-planting it on every bump. 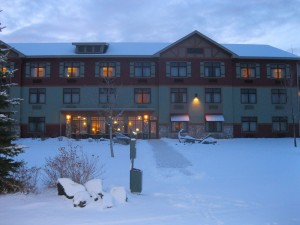 THE DRIVE
The drive was horrible. It snowed heavily the entire way up. We saw at least seven vehicles in the ditch. One car was inches from hitting us, but the driver over-corrected and ended up in the ditch. I don’t think I blinked once. After nearly five tense hours on the road, we made it to Duluth, and our hotel on the shore of Lake Superior. I was so ready to get out of the car, but Scott kept driving. He wanted to show me around the downtown area and the pier. I was not happy, but it turns out he was right. It was really pretty. The snow was now lightly falling, people were out walking around, and we eventually parked and walked around a bit. We decided to save the pier for later in the evening, and went back to the hotel to unpack our fully loaded vehicle. The sun was starting to set as we got ready for dinner. Scott has been to Duluth many, many times, and knew there was a walking path out the back door of our hotel that followed along the shore. We planned to take that path to the pier and then go out to eat. Sounds fun, right? 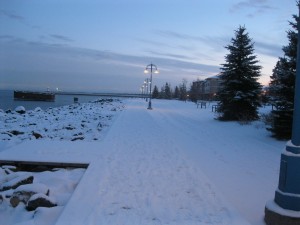 THE WALK
We get bundled up and walk out the back door. Arm in arm, we open the door and the view is breathtaking. Absolutely beautiful. The sun is down, city lights are glowing and the whole scene is blanketed in bright white snow. We continue along the path and Scott pointed out a couple things, the mountain we’ll be skiing tomorrow, where Wisconsin is from here. (Yes, I had to ask, haha.) We get to the pier and walk out as far as we can. It’s silent. The only things around us are ducks swimming by. I start snapping photos in every direction. I take the last picture and turn around to tell Scott how amazing this is, and there is Scott, down on one knee with a small box in his hand.

THE PROPOSAL
So here I am, standing with my man on one knee and the beautiful snow-covered world around me. What is a girl to do? Scream. And squeal. And then scream and cry. He said sweet things to me and asked me if I would spend the rest of my life with him and I, not being able to take my eyes off the ring and him, forgot I had to answer the question. I stared at him and then the ring and then realized it was my turn to talk. “Oh my gosh, yes of course! Of course!” He put the ring on my finger, and it’s a perfect fit! 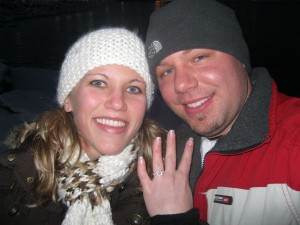 WE’RE ENGAGED!!
I can’t believe it! We’re hugging, kissing, taking pictures with the ring in it – so excited! I asked him all sorts of questions, when did he get the ring, when did he know he wanted to ask me, if anyone in my family knew–all sorts of questions, and never once did our smiles come off our faces. We went back to the hotel and made our phone calls – my mom had no idea and it was so much fun telling her. I was teary-eyed through the calls and couldn’t be happier! The night was unforgettable!

If you’re wondering, we did end up going skiing, and I wasn’t too bad. I wasn’t cutting in and out like my all-star thoughts, but by the end of the weekend I did learn how to cut and do the side stop. I was pretty impressed with myself, and Scott said I did great, too! Best. Weekend. Ever! 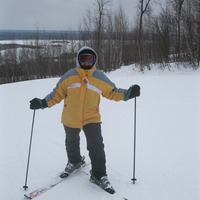 ♥ Follow me on my wedding planning adventure, through the joy, the tears, the dreams, and the realities of getting to that amazing moment when I walk down the aisle to marry my best friend. ♥