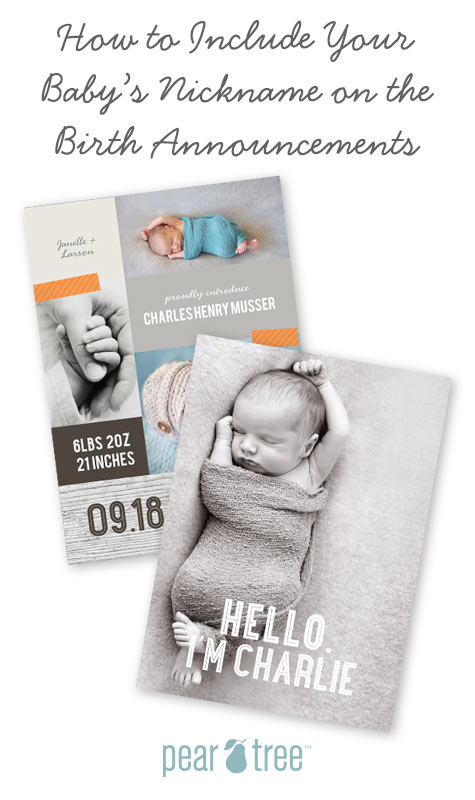 How to Include Your Baby's Nickname on the Birth Announcements

One of the most surreal moments of new parenthood is the moment when you introduce your bundle of joy to your friends and family members! Birth announcements are one of the first items on new parents' to-do lists, and they are pretty straightforward to put together: A cute baby photo, an adorable font and a few birth facts are a recipe for success.

If your child has a planned nickname, however, announcing him or her to the world might be giving you pause. Should you include your baby's formal name on the announcement? Should you leave it off entirely if your baby won't be going by that name? Don't worry, there are plenty of options! Read on for some advice on how to personalize your birth announcements to suit your little one's name:

If your baby will be going by a nickname only …
There's no rule that says you have to include a formal name on a birth announcement. It really depends on your own individual preferences. However, most parents would prefer that their family members at least know their little one's given name.

The best solution is to seek out birth announcements that allow you to display your child's name in two places! Take, for example, the Baby Girl Arrival trifold birth announcement from Pear Tree. Write your daughter's nickname—the name she will actually be known as—on the front of the invitation for all to see. On the third fold of the invite, you can include her formal name along with her middle and last name.

Another option is the First Hello Birth Announcement. Your child's nickname can go on one side (reading "Hello, I'm Charlie," or "Hello. I'm Betsy") while his or her formal name can go on the opposite side along with the birth details.

If your baby's nickname is more casual …
Some parents have optional nicknames in mind for their child—often either shortened versions of classic names (i.e. Dan for Daniel) or cutesy nicknames that likely won't age with their little one (like Lulu). In these instances, you may wish to forgo mentioning your baby's nickname on the birth announcement.

If you do choose to include it, consider listing your child's formal name, and then putting quotes around his or her nickname (i.e. Josephine Rose Walker, and below it, "Posy"). This will ensure your friends and family members know exactly what to call your little one when they come to visit!